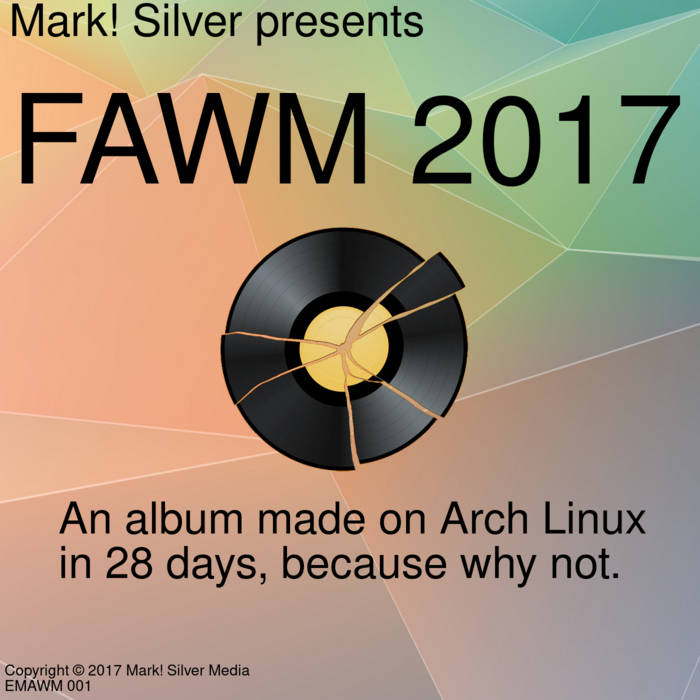 Ain't this nifty? Another year, another FAWM, so it seems; this one being my second, of course, and boy did I come out swinging. The majority of this album (the first 8 tracks) was started & finished within the first five or six days of the month. Then schoolwork kicked in harder, and I kinda slowed down... alot. Needless to say, if I didn't have this buffer built up in the first week, I wouldn't have been able to complete FAWM this year.

That wasn't really out of a lack of ideas, because believe me, I had plenty (and I'll get more into that in a bit). This was more of a "hey, i don't have time now to finish much of anything I started". Because of this, I did absolutely no vocal work in the latter 3 weeks of the month, so if instrumentals aren't your thing, you can stop listening after you've finished Pseudo-sun (and Pseudo-sun is pretty slick in my opinion, so you should definitely listen).

Due to the time constraint that is this lovely shortest month of the year, there were some missed opportunities with this album. Firstly, myself and my fellow cool cats (Chris & Josh) at the EMAWM project (emawm.tk) started working on a collab for FAWM that only got as far as having most of the lyrics being done. It's got potential though, and we're planning to include it in an EP that we'll be working on, so stay tuned for that juicy record to drop. ;)

Speaking of juicy records, I may be dropping an addendum release (perhaps "FAWM 2017.5") to this album sometime later in this year. There were a lot of rather incomplete ideas sitting around that never got worked into finished demos this year (including 7 mini-songs that I wrote on the 21st of this month) that I'd like to expand upon in the future. I won't promise that this album will happen, but keep your eyes peeled for it on this bandcamp in case it does.

Still speaking of juicy records, I'm overdue on making a full-fledged studio album based on some of the best material I've built up since as early as about a year and half ago. When I eventually flesh out enough of these tracks and generate a solid tracklist, this will happen, and if I'm gonna put it out this year, I'm gonna shoot for August 22nd (for reasons I'll explain in that album's liner notes).

Do I have a motion to dismiss these liner notes?

I motion to dismiss these liner notes.

I second the motion.

Everything by Mark EXCEPT:

No, there's no exception. I did everything that appeared in this release.
Oh wait, actually, the album cover uses a KDE Plasma Wallpaper and FAWM's error picture. Sorry, I forgot that you're supposed to attribute image sources. :P

Check out these friends & whatnot (the people on my watchlist that did stuff this year) on FAWM (in no particular order) (oh, and my fawm is @silvermediapro in case anyone was wondering):

Also, thanks to the folks, blokes, and egg-yolks that gave feedback on my music during the FAWM-season (y'all slick salamanders know who you are).

Also, thanks to the IRL peeps that listened to my FAWM-tunes throughout this year's FAWM-journey of mine (y'all dope dingos know who you are).

Also, thanks to YOU for listening to this album & reading these dorky ol' liner notes. Stay totally tubular, my friends. :)